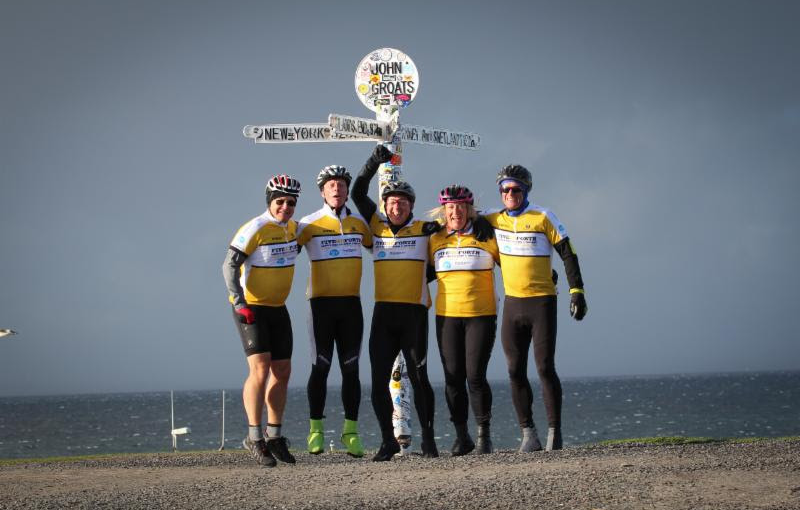 It is now four weeks since I reached John O’Groats, together with Chris Barrow, Sheila Scott, Les Jones and Simon Tucker, cycling 993 miles from Lands End. If you live outside the UK, we cycled from one end of the UK to the other. The ride took two weeks and although it was incredibly challenging and on some occasions painful, it was also the most enjoyable challenge I have personally undertaken.

On two occasions we had to ride through storms in the Highlands, where it was so cold and wet, it really did get to your bones. Even a 10 minute hot shower could not warm you up. However, the next day we would be cycling through countryside that would literally take your breath away, we could not stop smiling, even though we were cycling at only 8 miles an hour because of the strong winds.

Since I have been back, I have delivered many courses all over the UK and as I write this I am flying to Atlanta to deliver a two day Ethical Sales & Communication Course to 34 delegates. I have had many conversations with dentists who are extremely worried about changes to the NHS, in the orthodontic world, where many practices have lost their NHS contracts. I have also seen the digital changes taking place in dentistry, and how exciting it can be, but at the same time, how all teams need to adapt to change. I have also had conversations with many dentists about the increase in competition they are facing, and how to compete with other practices where their fees are cheaper.

If you can relate to these issues, then I would like to share just a few lessons from my bike ride that hopefully will inspire you as you make a success of your business and of course your personal life.

I only took up cycling around 18 months ago, but very quickly picked up the bug. If you would have said to me that I would be cycling 1000 miles across the UK, then I would have said you were mad. However, once we set the date for the challenge, which was six months away, then training had to take place. For the people that know or follow me, you will know that I have a very busy work schedule. I travel a lot, deliver courses at my centre and all over the UK, so training was always going to be a challenge.

However, I had no choice, and I knew I had to find time to cycle at least 120 miles per week. I would get up at 6am most Saturdays and Sundays and would hit the road, particularly the hills of Lancashire. Some of these sessions were brutal, but as you know we had some excellent weather in the summer, it was always enjoyable. When I was travelling, I always booked a hotel with a gym, where I would often undertake 3-4 gym sessions a week.

Time was scheduled in the diary, and I very rarely missed a session. I often hear business owners who tell me that they don’t have time for the gym, or personal stuff, if something is important, time can always be found.

Each day during the bike ride we had a morning huddle, mostly delivered by Chris Barrow. We discussed the day, the expected bumps, the weather and our rest stops. The morning huddle was motivating and inspirational, it was what we all needed, as there were times in the two weeks I did not want to get on my bike at all.

Working as a team was crucial. There were some occasions where each one of us was having a difficult moment. Whether it be the weather, the hills, or just tiredness, everyone motivated each other.

I honestly believe you can achieve almost anything in your life if you prepare, work hard and you have the desire. To me the desire is the most important. You have got to want it badly enough. Each day we had 60
-80 miles to cycle to the next hotel, which was always booked and paid for, so we had no choice, we just had to do it. If it meant three hours drying out in a pub or café half way round, because we were so cold and wet, we knew that once the storm had gone we had to get on the bike, there was no way we could fail. I am always reminded of the quote that “successful people do the things that unsuccessful people do not want to do”.

Lastly, I also discovered that there is more to life than just work. Throughout my life, I have always had an incredible work ethic, it is built in me, but I also know there will be some more challenges undertaken in the future, I am currently discussing this with my wife Grace, where we will do something together.

In the process of undertaking the ride, we raised just under £40,000 which is going to three charities, Cancer Research UK, Bridge 2 Aid and BrushUpUK. We were often informed what the money would do for the charities, and when you hear where the money goes and what it is being used for, then it really does make you feel good.

I also discovered the dental world has some of the nicest and most generous people you can find. We cannot thank the people who donated, who made us cakes, bought us dinner and who rode with us because they wanted to help us along the way, it was very humbling. It is still not to late to donate, please visit www.fivegoforth.co.uk

I hope you have been inspired with my tale and hopefully inspired to take a challenge of your own, or in some cases just raise your game in whatever you do. We are only here once, it is not a dress rehearsal, let’s have no regrets at the end.